That is why in this article, we will be introducing to you the 8 most basic guitar chords that a beginner like you should learn first before jumping into the complex ones in your guitar journey. 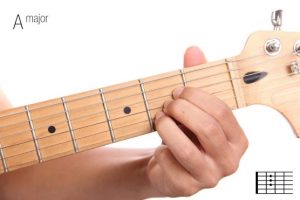 The Chord A Major is also recognized as “A chord”, may be a little challenging, especially for beginners since all 3 fingers should fit exactly on its second fret on adjacent guitar strings at the same time.  Make sure that 1st string should sound correctly as you twist your 3rd (ring) finger. 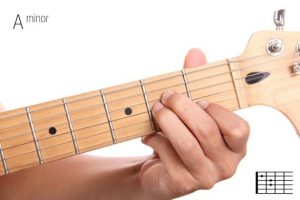 The A minor can be easily executed once you have mastered playing the E major. All you have to do it to move the chord arrangement over one string. Also, don’t forget that your 1st finger should be correctly curled to make the 1st string sound properly. In some situations, there is a call to reverse the 2nd and 3rd fingers to play Am chord but it is very rare since the open 6th strings should not be strummed in this case. 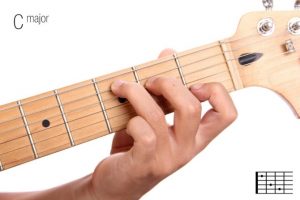 D major chord also known as the “D chord”, is also very basic for beginners and should be done perfectly in just a few practices. Although to fully achieve this chord, you need to be very focused where to place your fingers. Curl your 3rd finger on 2nd string to guarantee that the 1st string will sound exactly as it should as well as carefully strumming the first 4 strings and not the 6th and 5th strings. 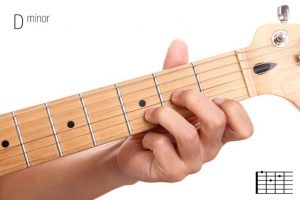 One of the simplest minor chords is the D minor but for some reason, beginners are having a hard time to execute it properly. The secret is just to focus primarily on the top 4 strings to achieve the D minor chord by also making sure that your 3rd finger is correctly curled in order for the 1st string to sound as it should. 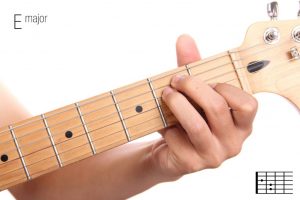 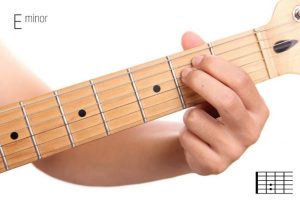 The Em chord will be the easiest chord to use as it merely needs 2 fingers. Just keep in mind that when playing this chord, both fingers should not touch the guitars open strings because it will greatly impact their rings. There are instances where you need to reverse the position of your two fingers by making 2nd finger on the 5th string and your 3rd finger on the 4th string in order to achieve this chord. 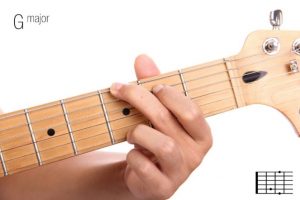 The G major chord also known as the “G chord”, depends primarily on how you curl your 1st finger in order to make the 4th strings sound as it should while strumming all six strings. Moreover, playing G major chord can also be easily switched to C major chord by placing your 3rd finger on the 6th string and your 2nd finger on the 5th string while your 4th finger is placed on the 1st string.

Go ahead – grab your guitar, follow these basic chords, and sing your heart out!

3 thoughts on “8 Guitar Chords a Beginner Should Learn First”

soundchecklab.com is a participant in the Amazon Services LLC Associates Program, an affiliate advertising program designed to provide a means for sites to earn advertising fees by advertising and linking to Amazon.com.